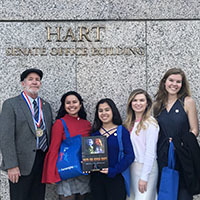 Delphian Students - Fighting to Eradicate Human Trafficking - Youth Help to Change the Law to Protect Future Generations.
Jan 18 2019 1:48 PM
Share to FacebookShare to TwitterShare to Google+Share to LinkedInShare to PinterestShare to EmailPrint this page 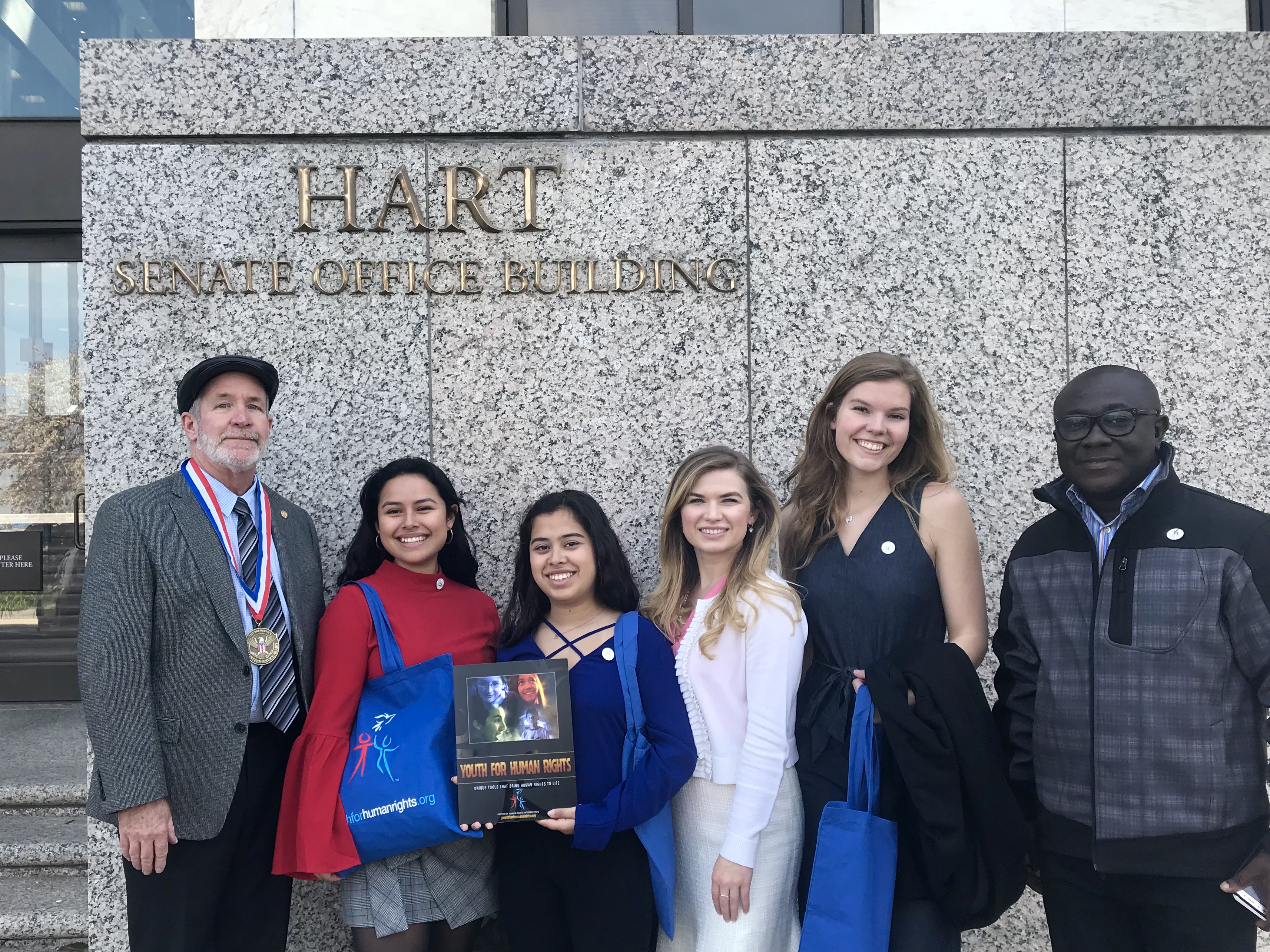 Youth advocating for legislation to combat Human Trafficking in Congress including three Delphian alumni and one Delphian student.

This past year, Delphian students participating in our Youth for Human Rights club, here on campus, travelled to Washington DC where they worked alongside the Youth For Human Rights organization to help with passing a bill that will help eradicate human trafficking. Below is the press release regarding the giant victory their efforts helped to create.

In the midst of the longest Government Shutdown on record, human rights advocates across the country took a moment to celebrate when President Trump signed the Trafficking Victims Protection Reauthorization Act (S. 1862) along with the Frederick Douglass Trafficking Victims Prevention and Protection Reauthorization Act, authorizing $430 million US Dollars to fight sex and labor trafficking.

Last spring youth, human rights advocates and leaders from the United States, Mexico, Canada and the Caribbean Islands converged on the US capital for the 1st Annual Youth for Human Rights North American Regional Summit to come up with solutions to human rights abuses devastating millions across North America. One of the key topics covered at the Summit was Human Trafficking and on that topic in addition to supporting education efforts, Summit youth took to the Hill to meet with Members of Congress and the Senate to encourage them to support the Frederick Douglass Trafficking Victims Prevention and Protection Reauthorization Act, to help fight trafficking across the country and beyond.

It is outrageous that still today, in the 21st Century; there are nearly 25 million victims of human trafficking worldwide. In the United States, more than 8,500 human trafficking cases were reported to the National Human Trafficking Hotline last year alone.

After years of successful grassroots lobbying efforts, human rights advocates from across the country and the aisles working to end human trafficking and bring solutions for those abused, were gratified to see their hard work pay off as the bills they helped fight for were signed into law.

In recent weeks President Trump has signed four bills that demonstrate the bipartisan commitment to end human trafficking. These new laws will strengthen programs supporting survivors and increase resources for combating modern slavery, as well as making sure US laws are fully enforced to ensure human traffickers receive the full measure of justice they deserve.

"It is very exciting as a young person to see a bill you have worked hard for get passed into law, especially when it is a bill that has the potential to help so many victims of trafficking and prevent future generations from falling captive to this illegal slave trade," said Erica Rodgers, the National Director for Youth for Human Rights in Washington DC. Ms. Rodgers further added "We shall continue to advocate and work to bring a final end to the crime of human trafficking. With everyone knowing and respecting each other's human rights, people will be more aware and work to end this criminal conspiracy."

To encourage further support of grassroots lobbyists and activists fighting to end human trafficking everywhere, January 2019 has been proclaimed National Slavery and Human Trafficking Prevention Month by the Trump administration. When signing the bills, the President called human trafficking "an urgent humanitarian issue" and further stated, "My administration is committed to leveraging every resource we have to confront this threat, to support the victims and survivors, and to hold traffickers accountable for their heinous crimes."

Modern Day slavery is a horrific problem. Raising awareness on human rights is the necessary undercut to this and so many other human rights issues. Article four of the Universal Declaration of Human Rights states: "No one shall be held in slavery or servitude; slavery and the slave trade shall be prohibited in all their forms." To read all of the human rights as listed in the Universal Declaration of Human Rights go to: http://www.un.org/en/universal-declaration-human-rights/ or for descriptive videos of each of the 30 human rights go to https://www.youthforhumanrights.org

About Youth for Human Rights:

Youth for Human Rights International (YHRI) is a nonprofit organization whose mission is to teach youth about human rights, specifically the United Nations Universal Declaration of Human Rights, and inspire them to become valuable advocates for tolerance and peace. YHRI teaches human rights education both in the classroom and in nontraditional educational settings such a through art series, concerts and other interactive community events, including regional and international human rights summits bringing youth together from across whole sectors of the world. Their most recent campaign has included #KnowYour30 with the deliberate purpose of increasing awareness of the 30 human rights every person has -- and how they are a part of everyday life. To learn more go to https://www.youthforhumanrights.org 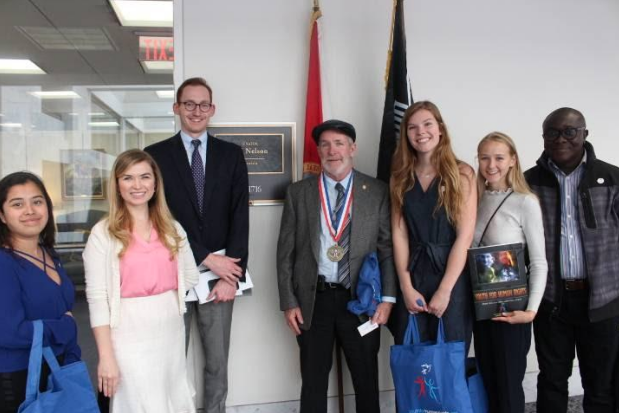 Grassroots youth lobbyists meeting with a Senate staff on human trafficking legislation including three Delphian alumni and one Delphian student. 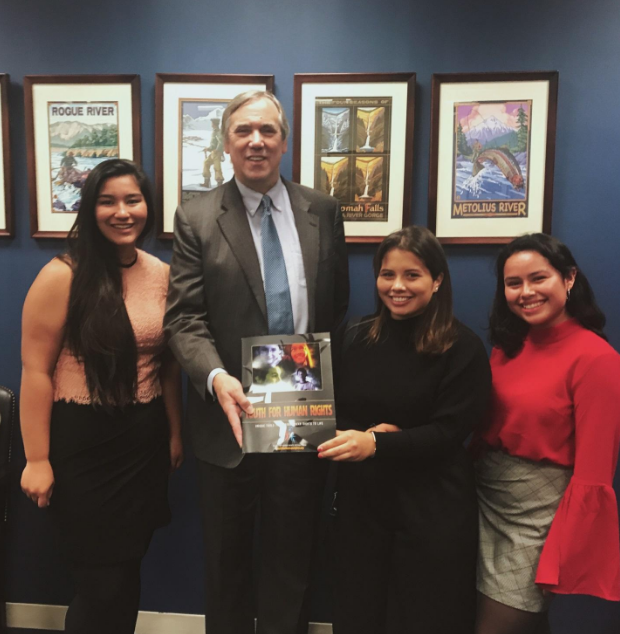 Two Delphian students and one Delphian alumnus meeting with Senator Jeff Merkley about the importance of Human Rights Education as a tool to prevent trafficking in high schools.

< Back to School News